More on Trends in College Completion

Yesterday I wrote a lengthy post (with two colorful graphs) about the trends in college completion in the US. Actually, I think I should have titled it "degree attainment" instead of college completion. At any rate, I pointed out that the percentage of 25-29 year-olds with a bachelor's degree has flattened out over the past decade and that unless something changes or more people above that age group are obtaining degrees that the overall proportion of the adult population with a bachelor's degree would necessarily flatten in the near future as well.

Well, I have some evidence that the latter has not been happening. And it involves another colorful graph -- a graph more colorful than both of the other graphs combined, in fact.

The graph below shows the percentage enrolled in school for a number of different age groups (for 18-19 year-olds I used only the % enrolled in higher education, but there was no disaggregation for the other age groups in the table). The key here is that the percentage of people in their late 20's and early 30's enrolled in college has not skyrocketed in recent years. In fact, all of the age groups have more or less plateued since about 1990 -- which would be in line with the plateau of 25-29 year olds with degrees that started in the mid-90's. 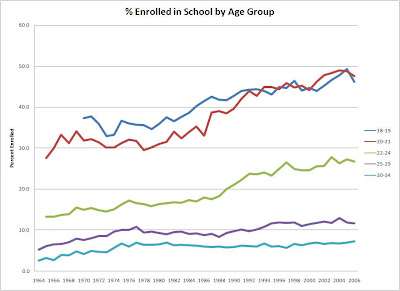 The other interesting thing to note is that there was a jump in enrollment for 18-21 year-olds a few years ago, but that percentage has since declined. That would explain the jump in percentage with a degree from 2006 to 2007 and would also indicate that that jump won't be the start of a new uptick.

And, in case you were wondering, I got the data from the Digest of Education Statistics (this table, specifically).

The unresolved question for me is still whether a 25 year-old (for example) is more or less likely to have a college degree now than was a similarly aged person 5, 10, or 15 years ago. I know I've seen a chart with the breakdown in degree attainment by age group up through at least people in their 60's, but I can't seem to find it anywhere right now (not that that chart would definitively answer that question, just that it's relevant and it's annoying me that I can't find it).
at 10:54 AM

How about citing this "friend" by name?