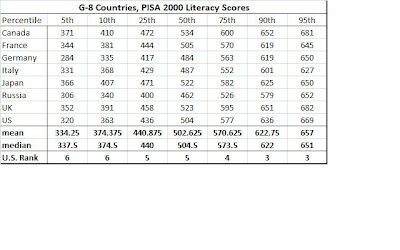 Bashing our education system has been a popular sport since well before I was born. Indeed, if I didn't think there were serious problems I wouldn't be studying education policy. Nonetheless, I sometimes wonder if people go too far. After reading Bob Herbert's op-ed in the Times today I decided I should take a little time to wonder if our education system is really that bad.

Though standardized tests have their shortcomings, they're usually the best way to compare the performance of different countries' school systems. Pasted above is a chart I made last semester of the reading ("Literacy") scores from just the G-8 countries (basically the 8 wealthiest countries in the world) so that we're comparing apples to apples. The scores are broken down by percentile for each country and then ranked.

The U.S. ranks 5th out of the 8 countries for median score, substantiating the feeling that we're falling behind and that reform is needed. But, you can see a large difference in performance for the top scorers vs. the bottom scorers in our country. Only two of the countries have top scorers that do better than the top scorers (90th and 95th percentiles) in the United States. Meanwhile, the bottom scorers (5th and 10th percentiles) in the U.S. only outperform two of the other seven countries.

So maybe the problem isn't really the entire system. Maybe our system does fine for some students while it fails others. You hear a lot in the news about impoverished schools in the inner-city or rural America, but you also hear a lot about the proliferation of AP tests, and the increasing competitiveness of admissions to the top colleges.

So maybe it's not our system that's broken but, rather, part of our system. We have both a lot of success stories and a lot of failures. Maybe we should be trying to fix the system that exists for the least fortunate students rather than berating the entire system.
at 4:40 PM

Hey, Corey. Are you designing your blog titles to work as magnets?

There's plenty of evidence that some kids in America are achieving and scoring well in international comparisons. Here's a TEACHER magazine column wherein our high-achievers (guess who they are) are compared to our low-achievers:

I actually have a big question about this international tests; how the heck can they compare literacy in different languages ? learning to read in English is way harder than in Spanish, for example (don't know about other languages); so, how can we equate them ?

similarly for math, science etc; are the tests designed so that we adjust for teaching things at slightly different times ?

So, how useful are these tests for comparing educational systems ?