Education and the Declining Median Class

A column a while back by David Brooks and numerous other reviews of Charles Murray's new book raise an issue I've been meaning to write about: the growing gulf between different classes (or "social tribes," as Brooks labels them) in the U.S. -- not just in earnings, which we hear a lot about, but in both achievement and a number of behaviors related to achievement.  As Brooks writes about the White population Murray discusses:


The NY Times followed up with a story about the achievement gap growing between rich and poor students in the United States.  The article was based largely on two chapters from a book that was released last fall by the Russell Sage Foundation (which, as I've previously mentioned, I highly recommend).

In one chapter, Sean Reardon from Stanford finds that "the achievement gap between children from high- and low-income families is roughly 30 to 40 percent larger among children born in 2001 than among those born twenty-five years earlier" and that the gap between students from families in the 90th and 10th percentiles of income is now "nearly twice as large" as the gap between blacks and whites (the opposite was true 50 years ago).

Since I've spent my entire post-college life either trying to teach low-income students or researching low-income students, the chapter jumped out at me when I first saw a preview of it last summer.  The fact that the achievement gap between rich and poor was actually growing (while the black-white achievement gap has essentially plateaued the past 20 years), jibed with what I've read about, and seen in, both our schools and our society. 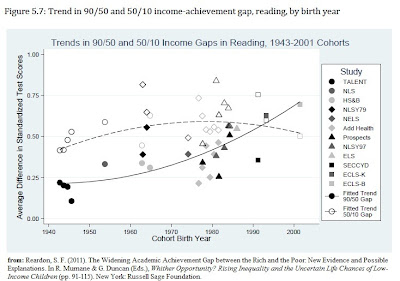 I actually missed that point when I first skimmed the chapter, but to me it's maybe the most pressing policy issue of the next few decades: how will middle-income Americans work and live?

As somebody who studies the effects of poverty, I'm pre-disposed to believe that poverty, and the low performance of children living in poverty, poses the largest educational problem.  And there's no doubt that that problem is large.  Even if the poorest kids aren't falling further behind the middle-income students, they're still far behind where they ought to be and farther behind the wealthiest kids than before.

But if the middle of the income distribution falls far behind as well, that could leave us in really serious trouble.  This chart of wage growth that EPI offered in response to Brooks' op-ed is one way of looking at the issue.  The wages of the working poor are awful, but it's the hourly wages of the middle-income folks that have seen the lowest growth in the last 20 years.  Indeed, the median household made only slightly more in 2010 than it did in 1978 ($49K vs. $46K -- Table H-6) when adjusting for inflation.

As the table below indicates, from 1991-2010, median income by education level declined considerably for the nearly 60% of the population with a high school diploma, some college, or an associates degree, held steady for the 20% or so with a bachelor's degree and increased for the 10% or so with a master's or professional degree (to reduce visual clutter, I leave off the 13% or so of Americans who did not reach, or did graduate from, high school and the 1% who earned a doctorate degree*).  Now, education levels increased a bit during the time -- so part of the explanation may be that there were more people in each of the higher groups -- but not by enough to change the fact that Americans with median levels of education are earning less now than they were 20 years ago.

It's hard to imagine a burgeoning economy in any country that sees no real income growth for those at the middle of the income distribution.  But Murray, Brooks, and others (including liberals as well) also note other worrying trends concerning health, marriage, childbirth, etc.

Indeed, another recent NY Times article reported that the majority of babies born to women under 30 are now born out of wedlock.  But more important are the different rates by social class: "About 92 percent of college-educated women are married when they give birth, compared with 62 percent of women with some post-secondary schooling and 43 percent of women with a high school diploma or less".  And while the number of babies born out of wedlock has risen for all three groups, it's the middle group that's seen the starkest increase: in 1990 only 11% of children born to women in their 20's with some college were born out of wedlock, but by 2009 that number had more than tripled to 34%.

Again, the problem is more pervasive among the least-educated women (the comparable number is 51%), but the largest change is in the middle of the income distribution.

It seems to me that a large part of the challenge is economic.  Jobs that pay high wages to employees without high levels of educational attainment are fast disappearing (one could write "high wage/low skill" jobs as shorthand, but I don't possess the skills for most of these jobs so that seems inaccurate to me).  We still have a not-insignificant number of jobs in construction, trucking, the trades, manufacturing, and so forth that pay fairly well, but the number of those types of jobs has declined dramatically -- largely due to globalization and/or technology -- in recent decades.  And it seems unlikely that this trend will dramatically reverse.  In other words, it seems unrealistic to expect anywhere near 70% of the population to find stable employment with decent wages without a 4-year degree.

The result, it seems to me, is that instability and low wages are no longer the domain of only the poorest Americans.  And it seems reasonable to assume that the growth in the rich-middle achievement gap is due, at least in part, to the spread of this job instability to the median earners.

In short, it seems like there's a growing bulge in the middle of the income and education distributions that is lost.  Fewer and fewer can make a good living without a college degree.  They're falling further behind the wealthy academically.  And to make matters worse (to be intentionally and melodramatically blunt), recent reports say they're increasingly divorced, fat, and lazy as well.

That's worrying.  But what really worries me is that I don't see an easy solution. Brooks' integration idea may be a small step in the right direction, and improving our educational system would certainly be another. But neither seems likely to prevent the problem from getting worse in the next 20 or so years.  It seems unlikely we can do any, yet alone all, of the following in a short period of time:

But I hope I'm wrong.  I hope 20 years from now I'm writing about the resurgence of the median class and not about the spread of poverty to children of middle-income households.  Either way, I think recent data indicate we need to adjust our focus when we discuss ways to boost performance of the lowest achievers.  If we want to focus research and policy on those lagging behind, we need to broaden our scope beyond just the 10 or 20% lowest-income Americans.  Those in the middle aren't doing that much better.

A few things to consider here:

2.) I can't seem to find the exact numbers at the moment, but the number with a master's, professional, or doctorate degree also grew -- to 10% in 2010 (meaning 1/3 of those with bachelor's degrees also had another degree -- the median salaries you see in the table would be for the 2/3 who have a bachelor's but do not have a higher degree.

You ask how low the wages of those with bachelor's degrees can fall if that population doubled . . . well, at the current rates, they might fall a little bit in absolute terms but seem likely to increase dramatically in relative terms.

I'm not a labor economist, so I'm not going to speculate on how many jobs will exist for those with bachelor's degrees in the future, but the trends look far worse for those without them.