A few brief notes on some smaller stories this week:

-A lot of people seem to be discussing the new report released yesterday finding that students who didn't submit test scores to colleges performed virtually the same as students with similar GPAs who did.  It seems like most people and most of the coverage (e.g. NPR, The Chronicle, and EdWeek) are interpreting this to mean that SAT/ACT test scores don't predict performance in college beyond what we know from test scores. But, as many have pointed out on Twitter, one glance at the tables on pages 47 (below) and 56 show the error in this interpretation.  In reality, in a number of the groups examined, students with higher test scores earn higher grades in college and are far more likely to graduate than than those with lower test scores and identical high school GPAs.  Somehow, though, students who don't submit test scores to test-optional schools do about as well as those who do despite having earned significantly lower scores.  What this says to me isn't that test scores don't matter but, rather, that non-submitters are savvy and that the act of choosing not to submit their test scores tells us something about their abilities and future chances of success. 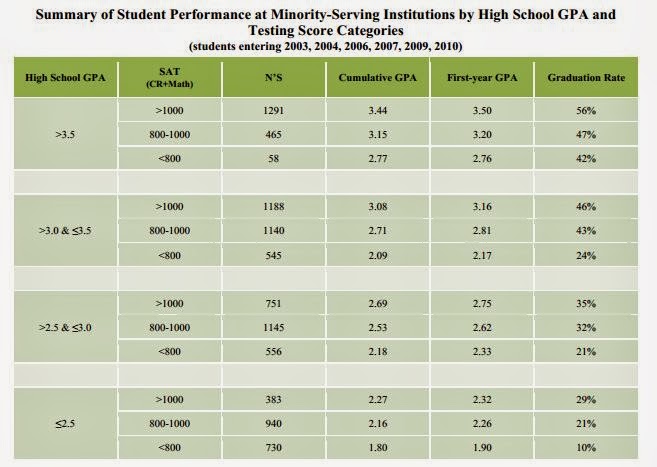 -Another day, another wild-eyed report about how it's impossible to fire teachers.  Yawn.  Not only do I not buy that administrators can't fire a teacher if they really try, but I'd bet my life savings that at least 90% of teachers who are fired aren't officially "fired".  Looking for a dissertation topic?  Go figure out how Principals go about dismissing teachers . . . most non-educators don't understand how much soft power administrators wield and how persuasive they can be when they suggest that a certain teacher look elsewhere for work.

-A new Pew report illustrates why it worries me so much when people argue that X person/people shouldn't go to college: the widening gap in college v. non-college outcomes (and keep in mind that is despite dramatic increases in college enrollment over this time that have made colleges far less exclusive than they were decades ago).  And income isn't the only thing that's changed, a wide range of social outcomes have as well -- take a look at how the relationship between income and marriage has reversed in the second picture. 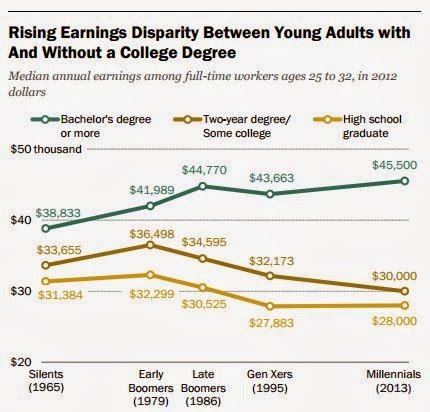 -Morgan Polikoff discusses some studies that found some positive impacts of standards-based reform.  On the one hand, I'm not sure how one could read the research and not conclude that the U.S. needs more coherent standards like the rest of the developed world.  On the other hand, I remain deeply skeptical that standards matter all that much.  They seem like step 1 in a 10,000 mile journey.

Next week, I'll offer some thoughts on the biggest changes I've seen in the education debate and the following week I'll start a multi-part series examining the ways in which urban poverty impacts students' performance in school . . .
at 12:01 AM