In a previous post I pointed out, much to my surprise, that the percentage of 25-29 year old's obtaining at least a bachelor's degree had leveled off over the past decade. Since that time they've made another year of data available and I also made some colorful graphs while trying to avoid reading for a course I'm taking.

First of all, there was a significant jump from 2006 to 2007 (from 28.4% to 29.6%) in the percentage of 25-29 year-olds with at least a bachelor's degree. I don't know if that means that there were some sampling errors that year, sampling errors in previous years, if a lot of people got degrees over the course of that year, and/or if there were a lot of 29 year-olds without degrees the previous year. Nonetheless, the flattening trend is still evident -- particularly compared with the growth in bachelor's degrees among the entire adult population (defined as 25+ years old). The chart below shows the growth in bachelor's degrees amongh both 25-29 year olds and the total population since 1940. 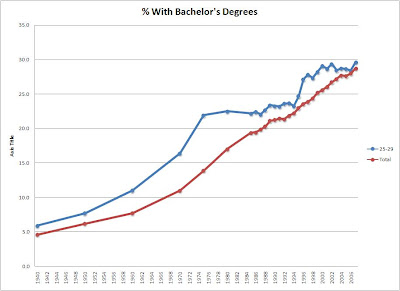 Historically, there has been a significant gap between the two statistics -- 25-29 year olds are much more likely to have a bachleor's degree than are the entire adult population. As you can see, the gap has narrowed considerably in recent years -- with the lines almost crossing in 2006. Of course, they almost intersected in 1994 as well before the gap increased dramatically so this might not mean much of anything. Below is the percentage difference between the two figures over the years. 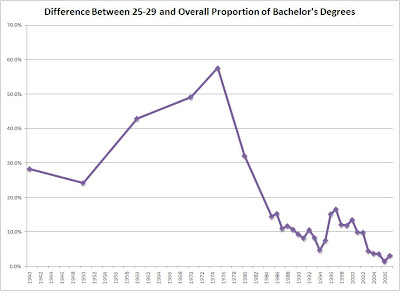 As you can see (again), the difference between the two figures has decreased substantially.

So, why does this matter? After WWII a lot more people started getting college degrees. At that point in time, the younger generation was much more likely to have a college degree over time than were their parents or grandparents. Over time this has become less and less true. In part, this should come as no surprise -- we'd expect a shrinking of the gap as baby boomers age. But, it could also indicate at least one of a few other things:

1.) A lot of people seem to assume (myself included) that the number of people obtaining bachelor's degrees continues to increase rapidly and that pretty soon a master's degree will be what a bachelor's used to be. In fact, it seems that degree attainment has stalled among the youngest demographic of post-college-age adults. Which might mean that any worries about the effects of too many people being encouraged to go to college are somewhat unfounded.

2.) It's fairly likely that the overall growth in the percentage of college-educated adults is about to stall out as well. That statistic (as evidenced by the first chart) has continued to grow steadily over the past few decades, but 25-29 year-olds aren't much more likely to have a bachelor's degree than are older adults then it would be difficult for that growth to continue.

3.) The only way it could is if there was growth in degree completion among those who are 30+ years old. I don't have data on that in front of me right now, so I'm not willing to count that out -- particularly given the advent of places like the University of Phoenix and the proliferation of online degree programs.

So, why the sudden interest in the topic? Well, it came up at a party last night. Yes, I really am that much of a nerd. Anyway, I continued the discussion with one friend today and he asked another related question. He remains unconvinced that more people aren't enrolling in college and wonders if the numbers might mean that more people are dropping out. That's a good question. I'm sure somebody out there has the answer.

Update: More on this topic here (I think #3 has been disproved). And I neglected to say that I got the data here.
at 7:23 PM

A quick inspection of 30-34 y.o. stats will show that, yes, there is a slight growth in the proportion with B.A.'s over the years. To parse out what is an increase IN those years, you probably want to look at Carl Schmertmann's 2002 article (http://muse.jhu.edu/journals/demography/v039/39.2schmertmann.pdf, $$), which is nominally about calculating parity progression ratios from censuses, but can be adjusted to inter-survey increases in any social measure (including % with BAs). To avoid the tangles of covariance for those who leave the population, you probably want to select out new migrants for the second survey year. I don't know if American Community Survey summary stats downloaded through DataFerrett can do that, but that would probably let you avoid the hassles involved in all the weights with different surveys, etc.

I took these numbers from an edited volume by Hoxby in which she argues that we have solved the access problem and now face one of completion instead. I think she overstates the case - access to any higher education is still unequally distributed by social background - but attendance at college is certainly up. What we've done, in my view, is simply increase access for the less well off at to institutions that aren't very good at graduating students. This is an argument similar to Karabel's in "The Diverted Dream." He focuses on sorting students into transfer/non-transfer programs, which still occurs in CCs. What we've started doing in the last few decades is sorting students into a set of new or growing public four-year institutions that in the name of student "convenience" remove the aspects of college that integrate students into the academic and social community. It's like putting someone on a diet when none of their friends are dieting and all the local restaurants are fast food. A few very strong individuals will succeed, and when the rest fail we can say, "What's your problem?"

Anybody want to do what Dr. Dorn suggests? I have too much work to do that's much more closely related to my field of interest.

Turducken: Oh good, I was hoping a higher ed expert would chime in. The question I want answered is whether, for example, a 25 year-old today is more or less likely to have a four-year degree than was a 25 year-old 5 or 10 years ago.